The search for unique photos in a time of plenty

So there I was, gazing at the surreal and beautiful icebergs washing up at the black sand beach next to Jökulsárlón glacial lake in Iceland. An awesome and very impressive spot. A very famous and easily accessible spot. Very crowded during the day with equal numbers of tourists and selfie sticks, all trying desperately not to poke each other’s eyes out. More tranquil during sunrise and sunset, although this sunset alone there were over 20 landscape photographers minding their own business, and two drones buzzing noisily overhead. Which made me think: there is probably an emerging market for commercially available electromagnetic pulse devices.

Does the above sound cynical? You’re right, it does, and I really shouldn’t complain because – wake up dude, you were in ICELAND! And hey, I loved it. But this situation made me think as well. Why should I even bother trying to take photographs here, on a spot that has been photographed countless times before? Don’t get me wrong, I loved visiting this place with my family and I was glad I did. But photography-wise, at that very moment, I felt it was pretty unsatisfying. In fact, after a couple of shots, I walked off. So here is the story of how some ups and downs at this location made me rediscover my motives for photography.

We live in an age where photographers themselves have become a bigger market than the photo stock market. To throw some random numbers in order to illustrate my point: the number of foreign tourists has more than tripled in Iceland since 2000 with 998,600 tourists visiting in 2014, exceeding the local population by 214%. And even though the dedicated camera market as a whole seems to be shrinking – due to the rise of smart phones, I guess – Nikon alone sold 4.61 million camera systems worldwide in 2015. This means that well-known and relatively accessible destinations will attract a lot of both amateur and pro photographers. Which is great, because life is short and everyone should enjoy Planet Earth while they can. But it also shows one of the photographer’s biggest dilemmas: the search for a unique photo that stands out from the crowd.

I left the black sand beach and its icebergs behind and started to hike south-west among the sand and gravel dunes. Such an attractive but desolate landscape. Only at first glance though, because among the dunes the first great skuas (Stercorarius skua) were starting to mate (while still allowing me safe passage), arctic plants started to flower, and I smelled scent markings of an Arctic fox (Vulpes lagopus). I started to experiment with the overwhelming landscape around me. I took some photos of a washed-up buoy and then played around combining the power lines with the impressive mountains and glaciers in the background. All great fun, but couldn’t those photographs have been taken anywhere in Iceland?

And then…the clouds gave way and a beautiful, golden light coated the landscape. Doubt set in once again: did I make the right choice, willingly giving up on a potentially great location? So I decided to hike to the glacier lake itself, in order to salvage something of this location and moment. A few km further, just as I crested the last hill, I saw a male rock ptarmigan (Lagopus muta), who seemed just as surprised as me! I tried to focus on my camera, but photographing a white bird on whitish rocks against a whitish background at dusk…my lens started to hunt. NOOO! I quickly switched to manual mode and managed to squeeze out some shots, before it flew off and resettled some meters away.

Wow, what an experience! This is actually one of my favorite photographs of the entire trip. Maybe not great with difficult light…. but that combination of landscape, the encounter, the hike, the doubt. Because at that moment I realized two things: for me wildlife photography is about solitude, but it’s also about a quest for unique photos. And even though my gamble had paid off, I realized it was the search that mattered more to me than the end result. It made me rediscover why I love photography, even though almost everything has already been photographed. It’s what I love doing, period. Take Iceland for example: yes, there are more tourists than locals. Yes, it can be crowded at well-known tourist spots. But as the world’s 18th largest island, it has enough space to roam around. In fact, there I was a mere 3 km away from the ‘crowd’, yet not a soul in sight – and endless photo opportunities when you bother to look for then. 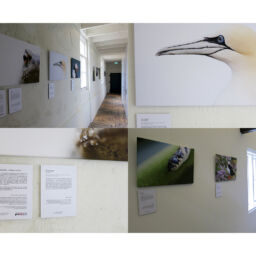